Augmented Reality in the Workout Industry When I was in grade school, and we would run laps at the PE lesson, our teacher used to make a zombie impression at the cross line, pretending to chase us. Excited, we would get more eager to run faster. Now, what were all these imagination games if not a forerunner of augmented reality for workout?

Back in the 90s, AR was something distant, but nowadays, it’s gaining momentum. Though shattered by the pandemic, the augmented reality industry is expected to flourish. According to MNM, the market can reach USD 60.55 billion by 2023, at a CAGR of 40.29%, between 2018 and 2023. 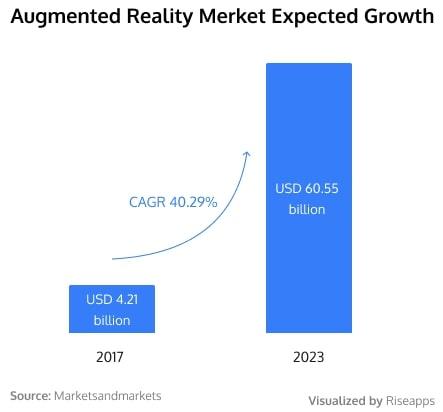 Workout and fitness are the fields where AR shines. As the first augmented reality exercise apps made their way in the 2010s, now the potential of this technology is slowly unfolding. So, why not embrace its advantages?

This is an article for everyone interested in creating a fitness and health app, and who is considering the idea of implementing an AR feature in it.

Can AR boost a fitness app? How exactly, and is the game worth the candle? Dive right in to find out.

For those of you who don’t know much about the subject, here’s a short introduction.

AR is the technology allowing overlay digital information on an image of something being viewed through a device (a smartphone camera, smart glasses, etc.)

In other words, AR lets us see the real-life environment right in front of us (e.g. gyms with the fitness machines) with a digital augmentation overlaid on it (e.g. a trainer’s hologram).

People all around the world use AR, sometimes not being aware of it. For example, Instagram and Snapchat have AR creative filters utilized by hundreds of millions of users.

While augmented reality enhances the real world using overlays, virtual reality immerses a user in a completely made-up environment. If you want to learn more about VR in the context of fitness, it’s a good idea to explore Black Boxvr, billed as the world’s first virtual-reality gym.

Mixed reality refers to a kind of AR in which graphical visualizations are projected interacting with the real world. In case you are interested, Runsocial would be an example of an AR fitness app with mixed reality features.

Is VR more perspective than AR?

The advantages and perks that virtual reality brings often seem more alluring than the ones of augmented reality. For example, how cool does cycling in Ireland or midtown Manhattan sounds, e.g. available with VZfit?

However, augmented reality is predicted to have a bigger impact on the market and our daily lives than virtual reality. According to the experts, the fact that VR environments demand a user’s full attention makes the technology badly suited to real-life social interaction. AR, on the other hand, provides “the potential to act as an on-call co-pilot to everyday life.”

The capability of integrating into daily real-world interactions made possible by AR puts it ahead of the game in many ways. In this light, making the app with AR features seem quite reasonable.

Now, let’s move to augmented reality in the fitness industry and workout industry. What does it look like?

There are various types of apps featuring AR for fitness, namely gamification and workout apps. People use them at home, at gyms and outdoors.

When it comes to fitness using augmented reality, some tools work via smartphones only, others require wearables (hands-free solutions), which can include

Overall, solutions requiring wearables are becoming more popular, as carrying a cell phone during the training can be inconvenient. If we free users’ hands, it can lead to safer and more productive workouts.

There are also systems with more complicated solutions like vSports that can go beyond AR and require additional hardware or software.

How AR features can improve your workout app?

Let’s start with a big picture. Why bother creating AR features for your fitness or workout app? Here are a couple of advantages to keep in mind.

Why include AR features in your workout app?

Let’s sum up – what can you do by utilizing all the advantages of augmented reality in fitness?

AR features to add to you app

Would you like to implement any of these features in your app? Ping us with a message.

We decided to share with you some of the most popular AR fitness apps and games for you to inspire.

This app is an example of utilizing augmented reality for fitness. With dozens of weight-based exercises to choose from, Gymnotize is a training app. It allows users to track their repetition count, create customized workouts and graph fitness progress. But it’s the app’s use of AR to show how to correctly lift weights that really makes it stand out.

3D fitness animations help users see exactly which muscle groups are being used in which exercise. The AR tools are also helpful for correcting exercise technique.

How to develop an augmented reality fitness app

Of course, all these processes are inextricably linked, and it’s a good idea to turn to an experienced fitness software development company like Riseapps, to make sure your app is going to be ahead of the game.

Our experience in fitness and AR

At Riseapps, we created plenty of fitness software. A tablet app for fit20, an EU-based fitness and health franchise with more than 140 studios on 4 continents, can serve as an example. The company, a world market leader for High-Intensity Resistance Training, needed a tool for clients to follow the accurate workout scheme and use their precious exercise time with the ultimate good. We’ve developed the app that reads data from the hardware sensors and displays it in real-time on the Android tablet mounted on a fitness machine, showing a clear exercise path and a client’s progress.

We also have considerable experience in building augmented reality features. Not long ago, we created a groundbreaking Atmoscan app – an AR tool showing safe places on the map during hurricanes, tornados, etc. It allows users to actually see wind and gusts around them. The moving air is visualized on the screen with real-time accuracy. As of 2020, this is only one solution of this kind available on the market.

Marrying fitness with augmented reality features is not rocket science. So if an AR workout app is what you are shooting for, be sure that Riseapps rise up to this challenge, creating a tool that will stand out in the market and bring you profit.

In this article, we’ve touched upon the topic of workout and fitness augmented reality.

We listed the advantages of using AR in the fitness industry that include increased user engagement, extended audience, and tapping into the new revenue streams. Some main AR features in apps include real-time data visualization, gamification and holographic trainers. We looked at the most popular apps, games and wearables, namely Zombies, Run, Golfscape AR, Solos Smart Glasses.

To top it all off, AR has immense power, so why not use its advantages?

If you want to build an augmented reality fitness app, let us know. Our developers have broad experience in AR, as well as in fitness software development and can make your app shine. Ping us with a message, and we’ll get back to you at no time.

11648
Previous article
HIPAA Compliance Checklist for IT
Next article
Internet of Things for Fitness Tracking: How to Implement Devices for Your Smart Gym
Read also
Let's Talk