Flutter App Development vs React Native: How to Make a Right Choice [2021] Hitting two birds with one stone and choosing that very stone – React Native vs Flutter. One of the most pivotal questions asked before any development is launched is “What platforms are we targeting?”. In the case of one target platform iOS/Android, the obvious solution is to go for native development, the choice is clear. In case an app needs to run seamlessly on both platforms, the variety of choices double: two mobile native apps or one cross-platform app. The first option is the perfect choice for complicated apps with robust functionality, sophisticated graphics, etc. With native feel comes a price in the form of longer coding time and more developers involved. If your app doesn’t demand extremely high performance – the ultimate choice is to hire cross-platform developers. Thankfully, there are a lot of technical tools, that allow us to create one code base with a native look and feel for both iOS and Android, help easy coding and faster time to market. In this article, we compare two frameworks with tech in mind and list the advantages and disadvantages of each framework. Hopefully, it helps you decide what tools to use for your next cross-platform application. Let’s get started.

Before making any decisions, it’s in human nature to rely on proven technologies, backed by tech giants, applied by big companies and trusted by many different businesses. In the case of React Native and Flutter, they are both backed by industry leaders, the first one – by Facebook, the second one by Google. The one difference is that one technology has already proved its reliability and is widely adopted, another is relatively new and not yet widely recognized.

React Native got the first public preview in 2015, Flutter introduced its Alpha two years later in 2017. This two-year difference played its part. Being the first React Native, today has gained more traction, stronger community and is implemented by more businesses. Flutter, in turn, launched its stable version only this May. Thus, the first shoots of the mainstream market are only to emerge.

Nonetheless, let’s see big names that are using these frameworks.

On top of that, Flutter with Dart is going to be the official tools to build apps for the new OS Fuchsia, that is currently being developed by Google.

Now comes the most exciting part. We have defined several critical criteria for you to feel the basic differences between these two platforms.  Although the table is a bit bulky, it contains everything you need to keep in mind about two techs.

Good news. Should your choice be React Native or Flutter you get the following benefits:

Wrapping up all the mentioned characteristics and adding some vital info.

As we see, the benefits of Flutter outnumber the benefits of React Native with visa versa situation with disadvantages. With Google’s framework making its first steps, it’s difficult to outline the major cons. Time will show, once Flutter reaches massive adoption.

The key aspect here is not the number of cons in the list, but the speed they can be solved. For instance, React Native had problems with 3D.  Recently they were fully covered by community and Facebook.

Not sure what fits your project best?

Get a consultation from our experts

Interaction Between an App and a Platform

React Native’s architecture is easy to understand, yet, there might be issues with performance. Every time widgets are accessed (that happens frequently) the connection needs to go through the bridge. An app manipulates 2 realms: native and Javascript; and when moving from one to another, the bottleneck can occur. Thus, to boost app performance, such passes should be kept to the least. Flutter instead doesn’t have Javascript bridges. It provides its widgets and uses Dart, which is compiled into native code straight away for many platforms, omitting problems. 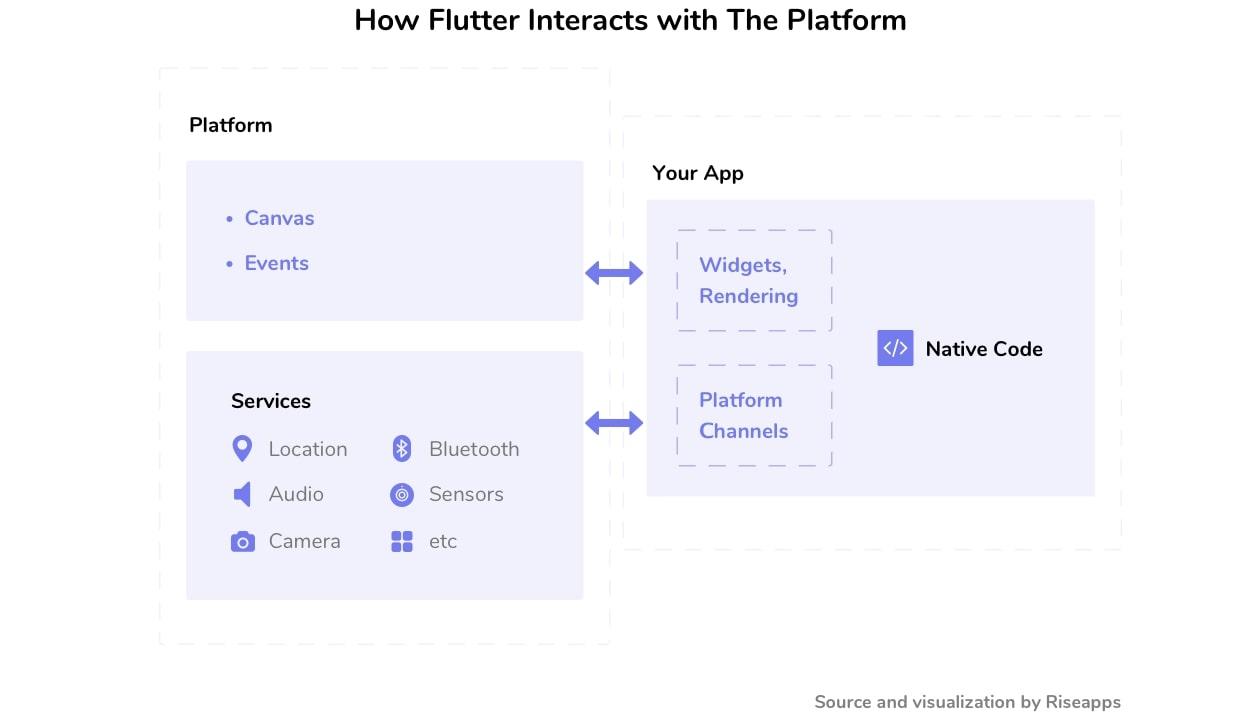 As we can see, Flutter is the major competitor to React Native, yielding only because of its immaturity. Google framework offers almost the same as React Native, and sometimes even more, e.g. in case of performance.

React Native or Flutter: How to Make the Decision?

Bear in mind your project’s features. Both platforms provide almost equal opportunities. However,

Pay attention to the scope of your project:

According to the industry analysis, Flutter will become the next big thing in the cross-platform app development, just like SwiftUI for native Apple development. In our opinion, some time should pass and big companies need to adopt this technology.

Any choice you make: to be dare and dive into the unknown or to stay on the safe ground, we are ready to help you with both technologies. Consider our React Native and Flutter app development services.

Contact us to get recommendations about the best platform to suit your project’s needs. Moreover, Riseapps was named Top Cross Platform Mobile App Development Companies  according to the AppDeveloperListing.com.

Bonus: When Not to Use Neither React Native nor Flutter

It’s up to you to decide who is the winner in the battle “Flutter vs React Native”. Still, there are reasons when not to choose at all.

When not to implement cross-platform approach:

Have you found the characteristics of your app in the list above? Choose native development.

4659
Previous article
SwiftUI Framework for Native App Developers: What You Need to Know
Next article
How to Build a Telemedicine App: 7 Steps to Connect with Patients
Read also
Let's Talk